As has been written elsewhere on this website, the Social Security Administration has a multi-level appeal process (initial level, reconsideration level, hearing level and Appeals Council level). Most of the fibromyalgia centered cases will be won at the hearing level. A claimant with fibromyalgia can be expected to be denied at the initial level and the reconsideration level. The reason why most of the claimants with fibromyalgia are denied at the first two levels has do to partly with the nature of the disorder itself and partly with the regulations and rules that the Social Security Administration uses to decide its cases.

The Nature of Fibromyalgia . According to the National Institute of Arthritis and Musculoskeletal and Skin Disease (a part of National Institutes of Health, Department of Health and Human Services) fibromyalgia affects somewhere in the area of 5 million people (in the U.S.). Of the people affected, a disproportionate number of those diagnosed are women. Although fibromyalgia may begin to affect people of any age, most people are first diagnosed in their early 40s. The most common symptom of fibromyalgia is widespread pain. The American College of Rheumatology has set out specific conditions or criteria that a patient must have before a patient can be diagnosed with fibromyalgia. Included among those criteria is pain or tenderness in all 4 quadrants of the body that has lasted more than 3 months. 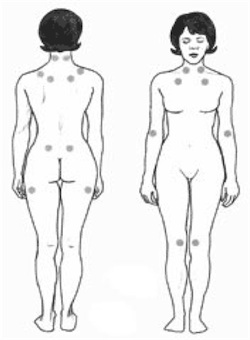 Even with the existence of trigger points, there are no definitive tests to prove the existence of fibromyalgia. That is to say, fibromyalgia cannot be seen on x-rays, CT Scans, or MRIs. There are no tests (for example, blood tests) to examine for fibromyalgia. As a result, the medical community makes a diagnosis of fibromyalgia as a “rule out” diagnosis. That is, physicians when presented with the complaints of widespread pain, accompanied by other complaints which may include: irritable bowel syndrome, headaches, restless legs syndrome, sleep disturbances, morning stiffness, difficulty with sleep, memory problems (sometimes labeled “fibro fog”) to name a few, will often test for other causes which can be discovered by known tests (for example lupus). If the tests fail to reveal a medical condition that is the cause of the problem, the physician may conclude that the patient has fibromyalgia.

There is no known cure for fibromyalgia. Treatment is limited. Many physicians prescribe physical therapy and home exercise. Only three drugs to date have been approved by the U.S. Food and Drug Administration (duloxetine, milnacipran and pregabalin). After much study and several years of experience, the medical community is now understanding that pain medications (such as acetaminophen and tramadol) do not work very well to handle the pain. Some nonsteroidal anti-inflammatory drugs such as aspirin, ibuprofen and naproxen sodium are used with some success to treat the inflammation. The class of drugs known as antidepressants have been seen as helpful in treating the symptoms of fibromyalgia. Typically, the dose administered is less than the dose given to patients with depression. The class of drugs called benzodiazepine is sometimes used in patients with fibromyalgia but only when the other drug regimens have failed. For more information about fibromyalgia see the following link to: http://www.niams.nih.gov/Health_Info/Fibromyalgia/default.asp.

Since the Social Security Administration, in fibromyalgia cases, will have to assess the age, education and work experience of the claimant, it will need to access the claimant’s residual functional capacity. Most of the time, when those assessments are made at the initial and reconsideration levels, there is a denial. The reason for this is most likely due to the fact that many disability claims examiners deny the claim when there are “no objective medical facts” to support the claim.

At the administrative hearing, it is important to show that there has been a diagnosis of fibromyalgia, that the chart of the diagnosing physician has noted the existence of trigger points with the appropriate number of points. There should also be proof of the existence of the normal accompanying symptoms (those symptoms are mentioned above). There needs to be proof of the medication prescribed, its effect and side effects. Finally, there needs to be proof of the profound limitations caused by the condition. This is typically done through a “medical source statement.”