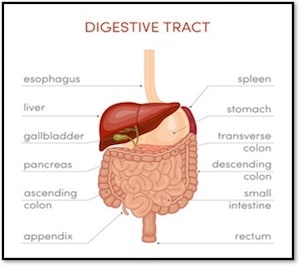 The symptoms from inflammatory bowel disease can be debilitating. Many times, these symptoms include fever, stomach pain, and diarrhea. Additional symptoms may occur such as vomiting, tenderness in the abdominal area, fever, a mass felt on examination, and perineal disease (pain for women during intercourse caused by fistulas or abscesses). There may also be signs of malnutrition like weight loss, low levels of albumin (hypoalbuminemia), potassium (hypokalemia), calcium (hypocalcemia) or magnesium (hypomagnesemia).

Unfortunately, inflammatory bowel disease does not stand alone. Often inflammatory bowel disease is seen settings which include other medical issues in other areas of the body. These other medical issues are called “extraintestinal manifestations.” Some extraintestinal manifestations occur in the skin, for example, skin tissues, usually in the legs, become necrotic. Other manifestations happen the liver, for example, swelling and sometimes scarring of the bile ducts in the liver or the development of gallstones. Still, others are found in the eye, for example, iritis and uveitis to name a few. Finally the kidney can be involved, for example, kidney stones or a swollen kidney due to a buildup of urine.

While there are many diseases which are under the broad category of inflammatory bowel disease, there are two primary diseases which the Social Security Administration centers on Crohn’s Disease and ulcerative colitis.

Crohn’s disease is a condition which causes swelling (doctors call it “inflammation”) in any part of digestive tract. The digestive tract starts at the mouth and ends at the rectum. The most common section of the tract affected by Crohn’s is the end part of the small intestine.

The swelling can cause the intestine (also called the bowel) to empty frequently which is the reason for diarrhea. With diarrhea also comes severe abdominal pain. Sadly, with this disease, there is more than just diarrhea and abdominal pain. This disease often has the extraintestinal manifestations as noted above. Chron’s disease is a life-long condition. It is not thought to be curable. Even after surgery, the symptoms of Chron’s disease often recur. Sometimes the medication required to control the Crohn’s can cause serious side effects. For example, adalimumab, taken by injection, to help reduce the effects of Crohn’s can expose the patient to risks of serious infections. This occurs because the medicine lowers the ability immune system to fight infections.

It is interesting to note that Social Security does not believe that just because a person had to undergo surgery due to the inflammatory bowel disease (such as an ileostomy or a colostomy) that the person is unable to work. The criteria which Social Security is interested in when that has been a surgery is whether a person 1.) can maintain nutrition which is adequate and 2.) whether the surgery is successful in making the person functional.

There are two methods to get an award of Social Security disability benefits for inflammatory bowel disease. Under both methods, you must have a diagnosis of an inflammatory bowel disease by an endoscopy, biopsy, or another appropriate medically acceptable imaging study or findings during an operation. Under the first method, a person must have the same condition which is set out in the listing under the Social Security SSA regulations found under the Social Security Adult Listings, Listing 5.06. To have the same condition set out in Listing 5.06 means that the inflammatory bowel disease must have caused either an obstruction in the small intestine or colon. It requires that the obstruction is confirmed by an imagining study or during a surgery. Finally, the obstruction must occur at least twice, 60 days apart but within six months.

Under the second method a person’s inflammatory bowel disease must have two even though the person has undergone at least 6 months of treatment: 1.) a clinically documented abdominal mass; 2.) involuntary weight loss (the weight loss is measured at least twice the first being at least 60 days from the second. The loss must be at least 10 percent from the person’s “baseline); 3.) low serum albumin; 4.) anemia; 5.) perineal disease with a draining abscess or fistula or 6.) need for supplemental daily nutrition via a feeding tube or central venous catheter.

Social Security does recognize the people with inflammatory bowel disease have “good days” and “bad days.” In the context of this terrible disease, “good days” and “bad days” means there are times when the symptoms of the inflammatory bowel disease is worse and other times when the symptoms have abated. The length of worse and better times have no set duration.